In Rwanda earlier this year, as a woman in labour lay bleeding, a drone dropped blood bags and saved the day. A private company based in the US operates these battery-operated drones that use military-grade GPS navigation and fly along a predetermined route up to 120km away – not with self-determined licences to kill, but to save lives.With plans to chart a similar course, Madras Institute of Technology is working on a heli-drone that will cater to hospitals and ferry medical supplies. Its research team — Daksha — has decided to redesign miniature helicopters to lift more payload and fly more hours. 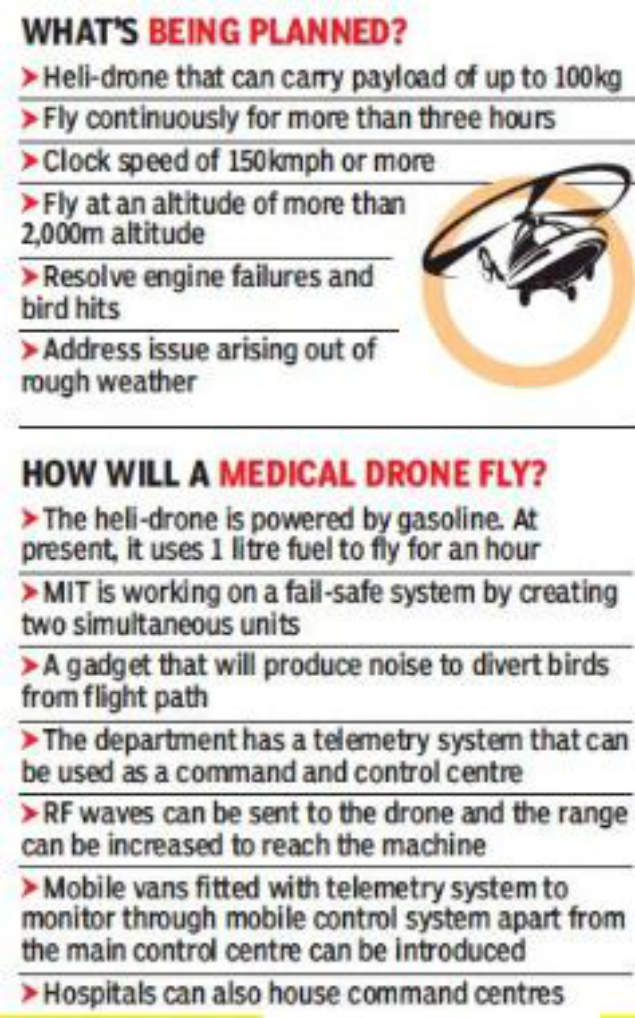 “Though our team was working on making an unmanned helicopter, after we participated at the defence expo in Thiruvidanthai in April, we seriously started to work on it,” said K Senthilkumar, associate professor at MIT’s aerospace department.

At present, the team has developed a 20kg prototype that can fly for two hours and can clock 80kmph on the speedometer. The team wants to upgrade this prototype. To avoid system failure, the team wants to focus on redundancy (in engineering, redundancy is the duplication of critical functions or components of a system to enhance its performance or make it fail-safe). “The helicopter has critical and non-critical components. The critical components include flight controller, initial navigation system, auto piloting, navigation units, automatic flight controller and gyroscope,” said Senthilkumar. “Any failure during a medical emergency can lead to loss of a life.”

Senthilkumar said after the team finished runner-up at the UAV Medical Express Challenge in Australia in September, hospitals have approached them to design drones that can transport blood bags and harvested organs for surgeries. “We have plans to bring out economically cheaper unmanned helicopters,” he said.

Director Vinoth’s Interview about Ajith & NKP at Vikatan and Dinamalar

Ajith is Teaching Us , We are creating World Records – MIT Students